When the strange people started coming to Israel, I was a little girl. They were wearing a blue number tattooed on their left hand. People whispered, pointed their fingers at them, and argued. I did not quite understand. The streets filled with people who would mumble to themselves or shout in all kinds of languages and frighten us, the children. Parents whispered that they were not dangerous but wretched, that they lost their minds in the concentrations camps. They taught us about the Holocaust at school and asked: “Why did they go without resistance? prosecuted like sheep to the slaughter.” We did not understand.

When I grew up, the discussion about the Holocaust became open and public, and sometimes even loud; I suddenly remembered those arguments. I understood what the grownups meant then and what they were arguing. The encounter with Berlin revealed to me the sophistication of the Nazis tricking persecution, even before the war and during their occupation of so many countries. I suddenly understood how an extremist organization could democratically rise to power and gradually turn democracy into a frightful dictatorship.

Today, as we look back and see the depth of the persecution against Jews, we wonder how the Germans and the Jews did not rebel and how they agreed to this conduct. The truth is that the laws restricting the Jews were not imposed in one day. It was trickling so slowly that it was hardly felt by the German residents, who were not involved. The Jews, familiar with anti-Semitism, thought each time that it was only another small restriction and it was possible to live with. Until it was impossible to live.

This conduct of trickling is presented in a fantastic project in the Bavarian Quarter of Berlin, the Schoenberg neighborhood, which was called “Jewish Switzerland.” 16,000 Jews lived there, 10% of the Jewish population of Berlin at the time, among them Albert Einstein and Hannah Arendt. The “short-name” monument, “Places of remembrance in the Bavarian Quarter: Marginalization, loss of rights, expulsion, deportation, and murder of Berlin Jews from 1933 to 1945,” was chosen out of 96 proposals submitted to the commemoration competition (the artists: Frieder Schnock and Renate Stich). The monument is 80 high street signs (3 meters high, so they cannot be easily wrecked) throughout the Quarter. Each sign has two sides: one side shows an image illustrating the order, while the other side bears a caption explaining the figure and its issuing. 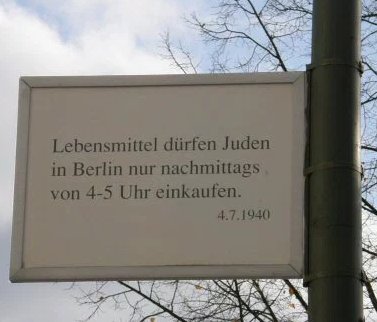 On the hidden side of this sign is an illustration of a bread loaf (see the first picture). The other side (on the left) bears the restriction (pictured on the right): “Jews in Berlin can buy food only between four and five in the afternoon.” Of course, there was nothing left to buy in the shops by that time.

Martin Niemöller, a German Protestant priest who opposed Nazism, wrote about this method of trickling prohibitions, and in 1945 he participated in the publication of the Stuttgart Declaration of Conviction:

In Germany, the Nazis first took the Communists,
I did not raise my voice because I was not a Communist.

Then they took the Jews,
And I did not raise my voice because I was not a Jew.

Then they took the members of the trade unions,
And I did not raise my voice because I was not a professional union member.

Then they took the Catholics,
And I did not raise my voice because I was a Protestant.

Then they took me,
But at that time, there was no one left to raise his voice for me.