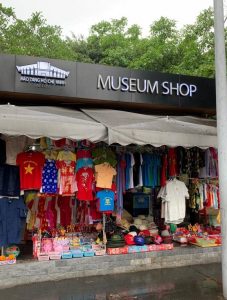 “There are things you only see in Vietnam,” told me our guide as he saw my eyes widen in surprise as we emerged from the Ho Chi Minh Mausoleum and I saw the museum shop. In place of the stylish shops that we are used to, we saw a large market stall caring the inscription “Museum shop.” The “shop” is an example of the uniqueness of Vietnam. Ho Chi Minh, Uncle Ho by the locals, is considered the father of the nation. His big dream was to attain independence. He succeeded in ousting the French and establishing the Democratic Republic in the northern region of the state. Though he was a modest man, the Mausoleum, about twenty feet high is huge and luxurious. He asked that his body will be burned and the ashes will be scattered upon three hills: in the north, in the center, and the south. And yet, in the mausoleum, the embalmed figure of Ho Chi Minh is displayed. There is no telling whether this is a wax figure, or the human being himself. At the exit of the site is the “museum shop,” a typical Vietnamese store!

Even a common issue like transportation is extraordinary in Vietnam. The taxi driver has a vast tablet, presumably to be used to display Google Maps or Waze, as navigation aids. Only the driver watched soap operas while driving. Watching did not stop him from talking on the phone. Sometimes, he spoke through his microphone, yet mostly, he held the phone in his hand. All this while navigating, through the motorcycles that surrounded the vehicle, coming from all directions and moving away in all directions while honking all the time. Around 10 million people live in and around Hanoi, possessing 5 million motorcycles, and 2.5 million more bikes come to the city from outside every day. A motorbike is cheaper by 300% than a car. Therefore, the whole family travels on the motorcycle together: a father, a mother and two or three children on a bike is a ubiquitous sight. There are also other uses for the motorbike: as a “taxi” or as a “freight” carrier, where the cargo exceeds all sides and towers over the rider.

Along a two-lane road, vehicles drive on the left one, and the motorcycles use the right lane. A driver, trying to overtake another car, transfers to the right path to see if salvation will come through there. Since the steering wheel is on the left, he does not know whether he can use this route for bypassing until he enters it and sees the conditions in it. Sometimes he wins, and sometimes he crawls after the bikes until he manages to come back to the left lane, the “faster” one, where he crawls after the trucks, buses and other vehicles. Vietnam has one National Highway that crosses the country from south to north.

A tourist arriving in Vietnam can get the impression that there are no road rules or that Vietnam is an upside-down world, though it is easier for pedestrians to cross the road than in Bangkok. The motorcycles park on the pavements. They are arranged by a manager that gives the owner a number that will make it easier for him to find the motorbike on his return. The pedestrians, on the other hand, walk on the road and risk their lives. It is clear that there are laws in Vietnam, and since this is a communist state, they are strictly enforced. But when it comes to transportation, as long as no accident requires police intervention, traffic is crawling but without any restrictions or laws. Cars and motorcycles cut each other very slowly, but without any consideration or signal to inform the other road users of where they were going – I took a video from the height of the 12th floor as I felt that words are failing me. 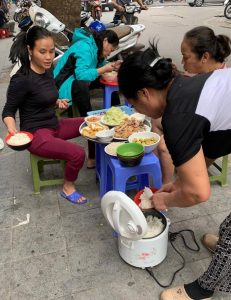 On the roads, you can see darken shops, where only daylight that infiltrates from outside is the source of illumination. Even in big cities, they mostly rely on sunlight, and most of the light bulbs in stores are economical fluorescent bulbs. The entrances seem to be dark, even when they are open for trade. The shops and its adjacent street are the centers of life. For example, lunch is served and cooked on the edge of the sidewalk, in front of the store. The street stalls in Vietnam sell everything from food to glasses. The food is prepared on the pavement, next to the smoky road, and at best, at the store’s entrance where the shop serves as a storeroom. Even if the “merchandise” is raw meat, it is sold on the pavement, exposed to every passerby and the road’s smoke, with the motorbikes parked on the side (see linked photo). 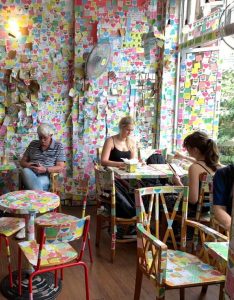 In Vietnam, and Hong Kong, most cafes and restaurants are located on the second and third floors of the buildings. It may be due to the wet weather that makes it difficult to sit comfortably on the pavement, possibly due to pollution from dozens of motorcycles and other vehicles moving on the roads. Either way, you sit in the coffee shop, sometimes behind thick glass, sometimes facing open windows, and watch from above, the endless traffic on the street. One of the most famous coffee shops in Hanoi is the Note Café. It’s located on the higher floors of the building, with the narrow spiral stairways, allowing the passage of only one person. It is unique in that it is coated with notes of love all over.

The last word: “The simple things are also the most extraordinary things, and only the wise can see them.” Paulo Coelho, The Alchemist