On the way from Ottawa to Quebec city, we drove along the river, the St. Lawrence. The river is vast in its breadth and length, from Ontario lake to the river mouth in the Atlantic Ocean, about 1,200km away. The river flows from south to the northeast and drains nearly a quarter of the planet’s freshwater reserves. Canada itself is enormous thus it is divided into ten provinces and three territories, even though 80% of the population lives in four of the provinces: Ottawa, Quebec, British Columbia, and Alberta. Ottawa and Quebec on the east side, British Columbia and Alberta on the west side. In the middle, there are but a few villages, generally near to the American border.

Since Canada is the second largest state in the universe, it is intelligible that the drives are long. To “ease” the way from Ottawa to Quebec, we stopped, in what appears on the maps, as a modest town, Trois-Rivières, named after the Saint Morris River, which splits Into three streams on its inlet to the St. Lawrence. In fact, this is a city of 100,000 residents, which has an extension of the University of Quebec (such as population in Rialto, California, or Davenport in Iowa, Darling).

The urban center is vibrant with students and full of tourists, who crowd the restaurants in the evening. As Americans love their guns, Canadians love motorbikes. Though I do not understand this craze – the 6-month winter in Canada is freezing and driving a bike is too cold and too dangerous. But we’ve seen incredible types of vehicles, such as motorcycles decorated with LED lighting and making a terrible noise, or bikes that look like a single car (pictured).

To the north of Quebec lies Canyon St. Anne. In spite of the dry summer, the canyon looks bottomless. The tremendous amount of water flowing and roaring, even in September. Though there is still a drought in America, in Canada, the rapids are raging. At the St. Anne we could see on the rocks the marks of water height in the rainy season and spring. On our way back to the city of Quebec from the waterfall, we saw another waterfall, the Montmorency waterfall. A massive amount of water that spills from 70 meters, visible from the street, so that you don’t have to strain, just raise your eyes.

The streets of Quebec city are suggestive of Mykonos, where the streets structure is meant to confuse the enemies and robbers. While Mykonos resides on shallow hills, Quebec sits on a high cliff; therefore it has many steep winding streets. So much so that there is a one-stop cable car: from the river to the magnificent hotel, built in the form of a beautiful castle that dominates the harbor entrance. On its other side resides the citadel, which is still used today by the Canadian army. The fortress is unique in its structure since it is not visible above the surface. On the contrary, it is submerged, so that it is possible to walk upright without being detected by the enemy. Québec – A Canadian motorcycle- 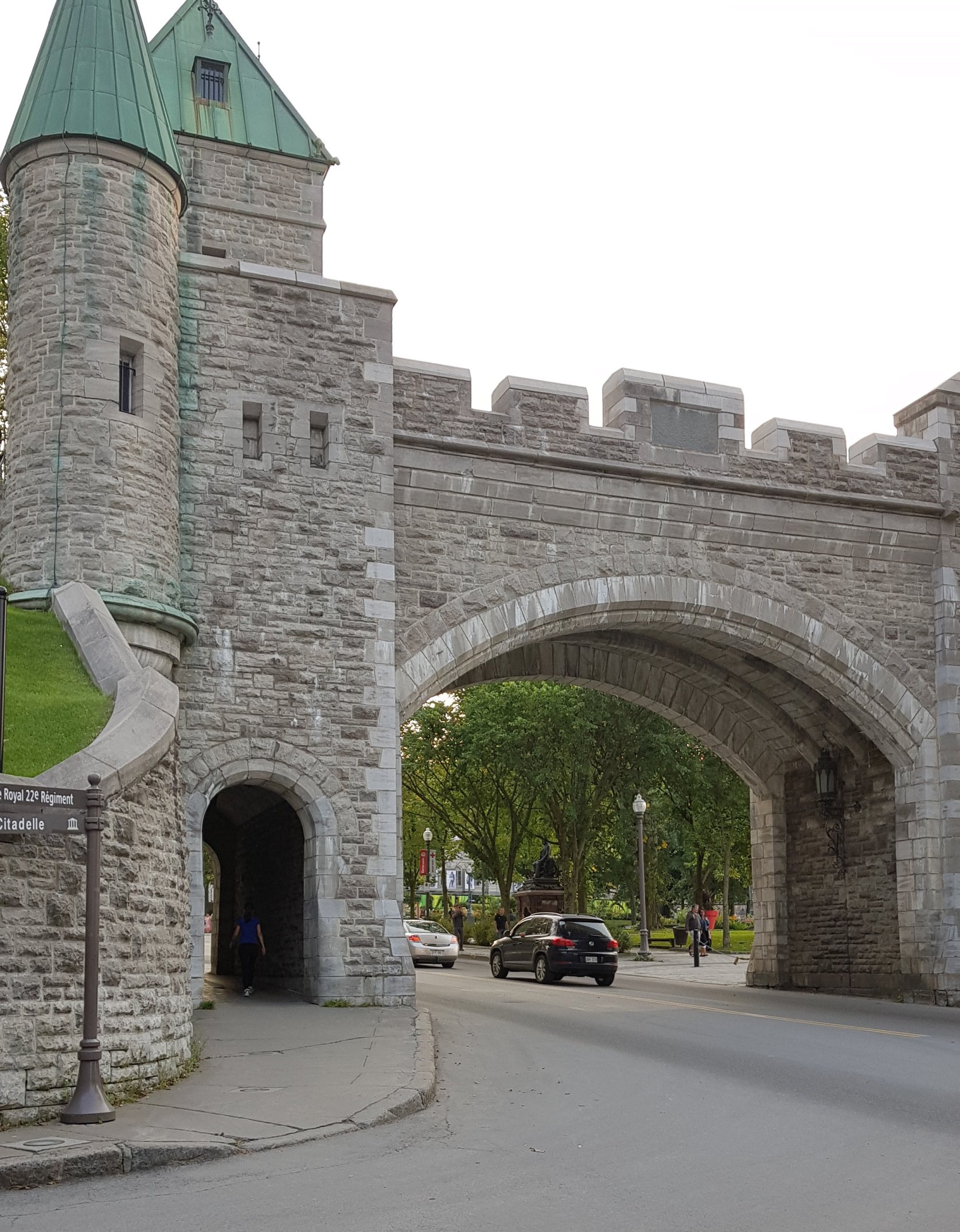 Quebec is one of the oldest cities in North America. A French merchant and cartographer (1608) established the city as a place of residence and not as a trading station. Therefore it remained in French rule. As it developed, England and France fought for control of the city. In 1759, England succeeded in conquering and controlling the town. England resisted even the American army that tried to capture it twice during the Independence war. Therefore, the official language in the entire province of Quebec is French. However, when you approach residents in English, they answer in excellent English.

The Old City is not very big and can be visited on foot. As in many ancient cities, traffic is difficult, and part of the town is a pedestrian-only area. There you can find cafes and restaurants that are open to the small hours. Music clubs have live performances, and we chose to go to a Bar Ste-Angèle, which is a jazz club and does not serve food, only beverage. I contacted it on Facebook and reserved a place since we had to get something to eat first. The owner answered me promptly and informed me that there was no trouble. Indeed, after a light meal, which took a long time – in Quebec a meal is a recreation in itself and not a way to refuel the body, we climbed the steep street and reached the place. On entering the place we spotted on one of the tables the “Reserved” sign. We realized that it was for us and we crawled in, trying not to interrupt the show. The proprietor came over to greet us with joy, making sure we were the reservation. The American virtuoso guitarist John Stowell was performing, and the cocktails were fantastic.