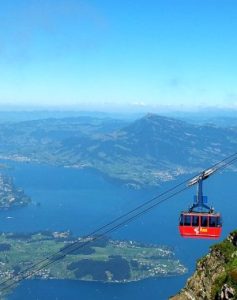 Sometimes dreams come true. No, I did not reach over the rainbow, nor did I get a Nobel prize. I was not elected as the president of the USA, and I did not break any Olympic record either. Those have never been my dreams. As a practical person, my dreams are modest. One of them derives from a pre-digital era object, the calendar. Every year we waited expectantly, before the new year started, for the new calendars. Big companies like banks, insurance agencies, and fashion chains, handed it out for free, for advertising purposes. However, the calendars were adorned with large picturesque and exotic scenes from around the world.

Those photos became imprinted in my brain as characteristic features of each country. For instance, the picture above, which is from Switzerland, gives the impression that the country is mostly rivers, lakes, and high mountains (which is true, Darling). Looking at that picture for a whole month left me with the desire to visit Switzerland. Thus, my modest dreams are to visit all those calendars’ scenes and see it with my own eyes. By now, I have visited more countries than I ever thought. But one dream kept eluding me – the Scandinavian Fjords.

Last winter, I decided that it is high time to carry out my fantasy, and I booked a cruise to the Scandinavian Fjords. As I have never been on a cruise, it was not only making a dream come true but to gain new experiences. Everyone told me that cruises are a very nice way of traveling. Like a turtle, your home comes with you. Some said that they don’t like the sea. Some assured me that the cruise boats are so huge that you don’t feel the wave motion. I was not worried since I already spent a night on a ship, on our trip to Ha Long Bay in Vietnam. 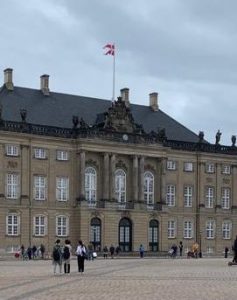 Since our boarding port was in Copenhagen, we decided to arrive a couple of days earlier and tour the city. Copenhagen is the capital of Denmark. Though it is the most populous city in Denmark, its population is less than one million residents. Thus its old center is tiny. The country has a cherished and active royal family. They have some ancient palaces around the city’s center, open to the public, not to mention the crown’s jewelry. The mansions are not very flashy, and so are the crown jewels. If the Queen is present at her palace, the Danish flag is up, and some of the houses cannot be visited for security reasons. The royal family has its guard that changes in the traditional parade.

We did not miss the “free city” called Christiania, which is an anarchist quarter in Copenhagen. Originally it was a deserted British military base. A group of Hippies took it over in the 1970s to establish a “free city,” a city without laws. In practice, the city is part of Copenhagen and receives services from it. Its uniqueness is the free growth of the marijuana plant and the open sale of its products. Of course, it became a European attraction until they had to make some laws. The third law is, “Do not take pictures of sellers and buyers” because it is illegal in Denmark, even if it is sold somewhat openly. The second one is, “Don’t run.” Running creates panic as if there is a police raid. The first law is “Enjoy!” 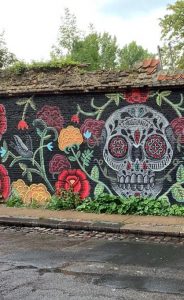 The place is bustling with life, crowds of tourists, Copenhageners, and locals. Graffiti paintings on fences and houses embellish the old buildings. Along the way, you can see stalls carrying cannabis goods in the open. As a pair of cops appear at one end of the street (a policeman and a policewoman,) the products disappear magically. The empty stalls remain in place, though. As the police move away, the goods reappear openly again. There is a complex of restaurants serving varied sorts of food. The seating is in the open air at shared tables shaded by huge umbrellas, which provide shelter from the sun and also – from the rain. Above the place, there is a cloud of smoke so that there’s no need to smoke, only to breathe. 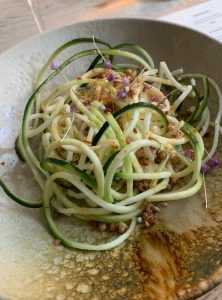 We had a good time in Copenhagen, and the weather was cold and rainy. For someone coming from the scorching middle-east, it was a real treat. Copenhagen is very conscious of environmental protection, so locals use public transportation, which is cheap, but they mainly ride on bicycles. There are numerous plant-based, vegetarian, and vegan restaurants. A trendy and chic restaurant that offers a vegetarian menu along with a regular one is the Cofoco restaurant. The restaurant is very popular with locals (make a reservation, Darling). The food was tasty and sophisticated at the same time.

And then we boarded the ship. A huge town! Fifteen stories high, two thousand crew members are catering to three thousand guests. Each deck has a variety of rooms: without a window, with a window, with a balcony, small cabin, suites, etc. Each floor has its bar and lobby. The ship has all amenities facilities: a gym, a spa, some swimming pools, a theater, a casino, and even a running track. Since our trip was a short one, only seven days long, we spent only two full days at sea. You did not feel the motion of the sea until we reached the open North sea where a storm of rain and wind developed. Suddenly, the boat’s movements were felt, yet it wasn’t frightening, and a pill against sickness did wonders. In the morning, we pulled away the curtains to see a fairytale village.

Green high mountains that waterfalls slit are the main feature of any fjord. The explanation for the “fjord” phenomenon, according to Wikipedia, is: “a long, narrow inlet with steep sides or cliffs, created by a glacier.” Meaning, a fjord is a finger of water in-between the mountains. There are many fjords in the world. Some are narrow and penetrate deep into the land. Some are wide and “short.” Yet, there are the Scandinavian fjords, wide and deep, and from which further fjords split away. The fjords are encased by high mountains all around. Their walls rise perpendicular to the water, almost at a right angle.

The ship entered some of the fjords, yet some are too narrow for it. Thus, we took a smaller boat to tour one of the narrower fjords. The feeling was of a glorious prehistoric place: high rise mountains, running waterfalls in the middle of summer as well as signs of waterfalls that are only active in winter. Small settlements reside at the end of the fjord. Looking down from the ship’s upper deck’s balcony, they look like Lego’s houses. We did not climb the mountains to see the fjords and the waterfalls from above. Maybe we should go back on a mountain road trip?