No one in Israel can forget the T.V. program of Chaim Hecht “Between Karkur and Singapore.” Not because Karkur, which is an Israeli village, is important, but because Singapore looked so good that we couldn’t understand how come things are so different in Israel especially since they learned many things from us. The program certainly raised the Israeli awareness of this island-country, but few know how much Israel helped Singapore reach this country. The cab driver asked us where we were from.

When he found out that we were from Israel, he went crazy with excitement. “I was at that place,” he stated, “What a fantastic country. Many years ago, in Sinai, we trained there for a year with the Israeli army.” He recalled many things from his stay as he had been able to visit all over the country. It turned out that when Singapore separated from Malaysia, which she had been associated with, and declared independence, they searched for a nation willing to train its army. The only country that was willing was Israel. Since then, Singapore maintains a tender spot for Israel in its heart.

The most worldwide famous structure in Singapore is the “Marina Bay Hotel,” (See picture up). The edifice is a complex of three skyscrapers, carrying a ship-like structure on their shoulders. This upper floor has a bar, an observatory, a promenade and an “endless” pool. Another link to Israel is hidden here as the Israeli-Canadian architect Moshe Safdie designed the buildings. The building is impressive, but few know its land was initially part of the sea, and it was dried. Singapore is a tiny island, about 700 square kilometers (with the drained areas). To increase its territory as its population grows, it dries the sea. Land and building debris are moved to the sea and submerged until it is stabilized and creates a sequel to the existing soil. This process requires 20 years till it grows to become safe for construction and residential. There are two dried areas in Singapore today, waiting for stabilization. 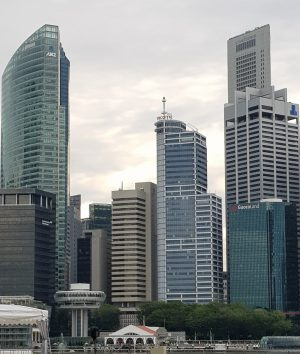 Most of Singapore buildings are skyscrapers, giving a sense of innovation and wealth. In Singapore, structures are “substituted” after 20 years. The tropical conditions on the island, 100% humidity and temperature of 300 Celsius throughout the year, accelerate building’s physical deterioration. So, after 20 years, they demolish the construction and reconstruct in its place a new and modern structure using the innovative materials that were grown in the interim. The commercial area of the city is entirely new skyscrapers, glass covered and very impressive.

Even residential buildings are skyscrapers to allow housing for as many people as possible in a small area, though they are less luxurious. The government is the one to destroy and to build, and it is likewise the one which populates the apartments. In Singapore only the wealthy people purchase houses. Everyone else receives the flats from the government according to their needs, and they do not have to pay a dime for it and only a symbolic fee for the accompanying services, maintenance, electricity, water, etc. Populating the building is done with an integration scheme known as Chinese-Malay-Indian-Other) Cmio. In other words, every structure is inhabited by a percentages-key: 75% of Chinese descent, 22% Malaysian descent, 8% of Indian origin and others. On the one hand, this prevents the discrimination of the minority groups. However, since the minorities are scattered, it is more difficult for them to receive religious services, and enjoy their culture, and even to find a buyer for their apartment. 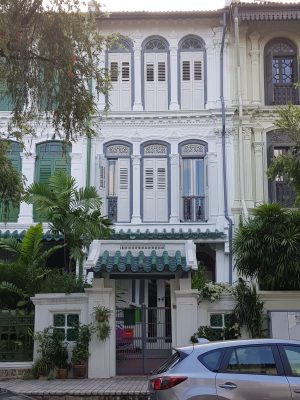 An integration method was established with Singapore’s declaration of Independence. It is an effort to make a nation out of the primary peoples that make up Singapore. To understand the make-up of the population, we need to go back in history, to the beginning of Singapore. It used to be a seaport and a commercial center, a crossroads between Asia and Europe, but in 1613 the Portuguese explorers burned it down. 200 years later, an English officer named Raffles acquired marshland on the island and was the first to realize the potential of the island and its unique location. On the swampland which he purchased, he established a free port (from taxes) thus many merchants flocked to. The island connects the Indian Ocean with the Pacific Ocean and controls the Straits of Malacca, through which a quarter of the world’s cargo passes. Therefore, the area of the straits turned to be the preferred area of the Pirates. In the year 2000, there were about 220 attacks in the region. Nevertheless, a joint effort by Singapore, Malaysia, and Indonesia resulted in a considerable decline in the early 21st century.

This history dramatically determines the population of the island.  Malaysians that came from neighboring Malaysia were the first to reach the island and to build small villages. They were employed in fishing and naval robbery. The Chinese merchants arriving at the island were mostly adult males. They found their mates among the natives, and sometimes even married them. Their kids were called Peranakan. Today they are regarded to be the place’s aristocracy because of their higher status. Their homes have been inherited from one generation to the other. Thus they are superbly preserved, as can be seen in the above picture. There’s a museum documenting their history and customs which are worth a visit. 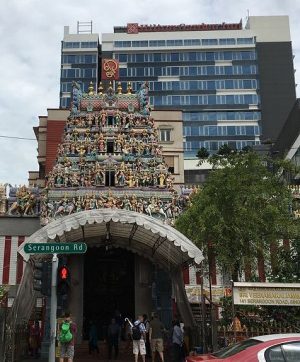 The formation of the port by Raffles created a demand for inexpensive labor. Thus migrants from China and India came to work on the island for several years, then returned to their country and family. Nevertheless, some of them descended along the island. The Chinese worked as laborers in the plantations and mines, and the Indians were porters in the harbor and storerooms and worked in construction as well. These workers built the Indian district, the Chinese quarter, and the Arab quarter. This districts house authentically preserved homes of the period, one to two floors. In these quarters you can attend the cultural heritage, both in temples and pagodas and in shops selling typical commodities. For example, in the Indian district, the oldest Hindoaisti temple, the Sri Mariamman temple, is active today as well (in photo). The streets are full of fabric stores for preparing the traditional sari, and jewelry shops, designed according to the Indian tradition. These ancient quarters have been preserved alongside the skyscrapers and are existing side by side (behind the temple in the movie).