The Internet created the phenomenon of “independent tourism”, where people are planning their own trips; They buy flights, rent cars, and reserve hotels all by themselves, without the help of travel agents. No more organized tours that are mostly bus rides along incredible distances, or remote hotels that have a secret deal with travel agencies. Thus, nowadays, a conversation about traveling starts with the sentence: “Were you already in…?” Indeed, we are all excited by breathtaking views, historic sites, and welcoming cities, so much so that with time, a list of mandatory sites for travelers, part of which is based on “herd mentality” has been created. Sometimes the sites that are considered mandatory provide the goods, yet sometimes… (Public relations people have to make a living, too).

An example of this type of “tourist trap” is the city of Toledo, Spain, which is half an hour away by train from Madrid, and was a lively center of the three religions before the expulsion of Jews and Muslims in 1492. The city is considered in Israel “a must site” and is listed as one of the 10 best Spanish towns that you must see. The city is really beautiful, but very small and a special trip is somewhat exaggerated.

So is “The Amalfi Coast Road“, which passes through picturesque villages in southern Italy and along the sea. The truth is that the place is beautiful, but the dangerous trip on a very narrow and steep road to watch the towns scattered along is not a must. It is enough to travel to Sorrento to see the cliffs and the classical structure of an Italian town to be impressed with the southern part of Italy.

While the previous two sites are interesting, yet are not a must, the city of Naples is an absolute No! “To see Naples and die”, says the popular Italian proverb. However, apart from houses with peeling plaster, overloaded laundry lines, noise, and dirt, there is no reason to see it at all (Proper disclosure: our mobile phone was pickpocketed there). Most of the tourist traps boast as a “world heritage site”, and there are more than a thousand. But the definition of a heritage site is “a site declared by the World Heritage Committee of UNESCO as a site worthy of preservation because of its special importance to the common heritage of humanity” and not as a unique tourist site! 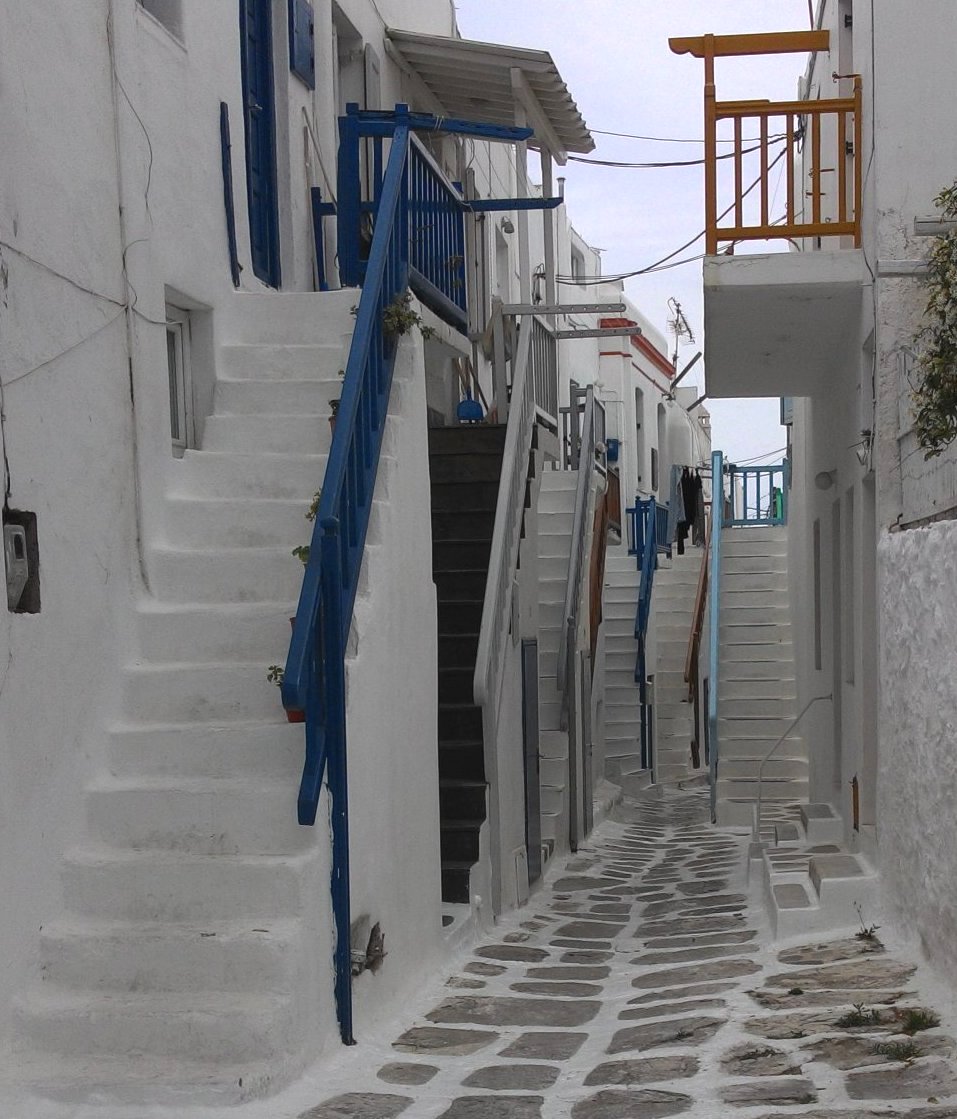 After this intro, it is rather obvious that we expected nothing when we went to a conference to the Greek island of Mykonos, but this time we had a good surprise. The urban center located on the shores of a bay of the Mediterranean Sea; The buildings are single or two stories, with the second-floor stairs, starting from the street (see photograph); They are whitewashed every year, in bright white according to local law (not cream, nor dirty white) and the wooden shutters are colorful. The city is constructed like a labyrinth of very narrow streets in order to hinder orientation and so throw the pirates that were trying to kidnap the residents and sell them to slavery (in the past, Darling, in the past).

The neighboring islands are reached by tourist boats. In ancient times, there were special trade relations between the islands, each specialized in one main product, and swapped with the others for their specialized goods. The specialty of the island of Mykonos was bread, baked from barley, which grew plentifully on the island, as is evidenced by the windmills scattered around. We got lost in the maze of alleys just to meet Captain’s Restaurant whose motto is “Food to share”. The food was traditional Greek and delicious, the service was warm and hearty, and I sincerely endorse it. 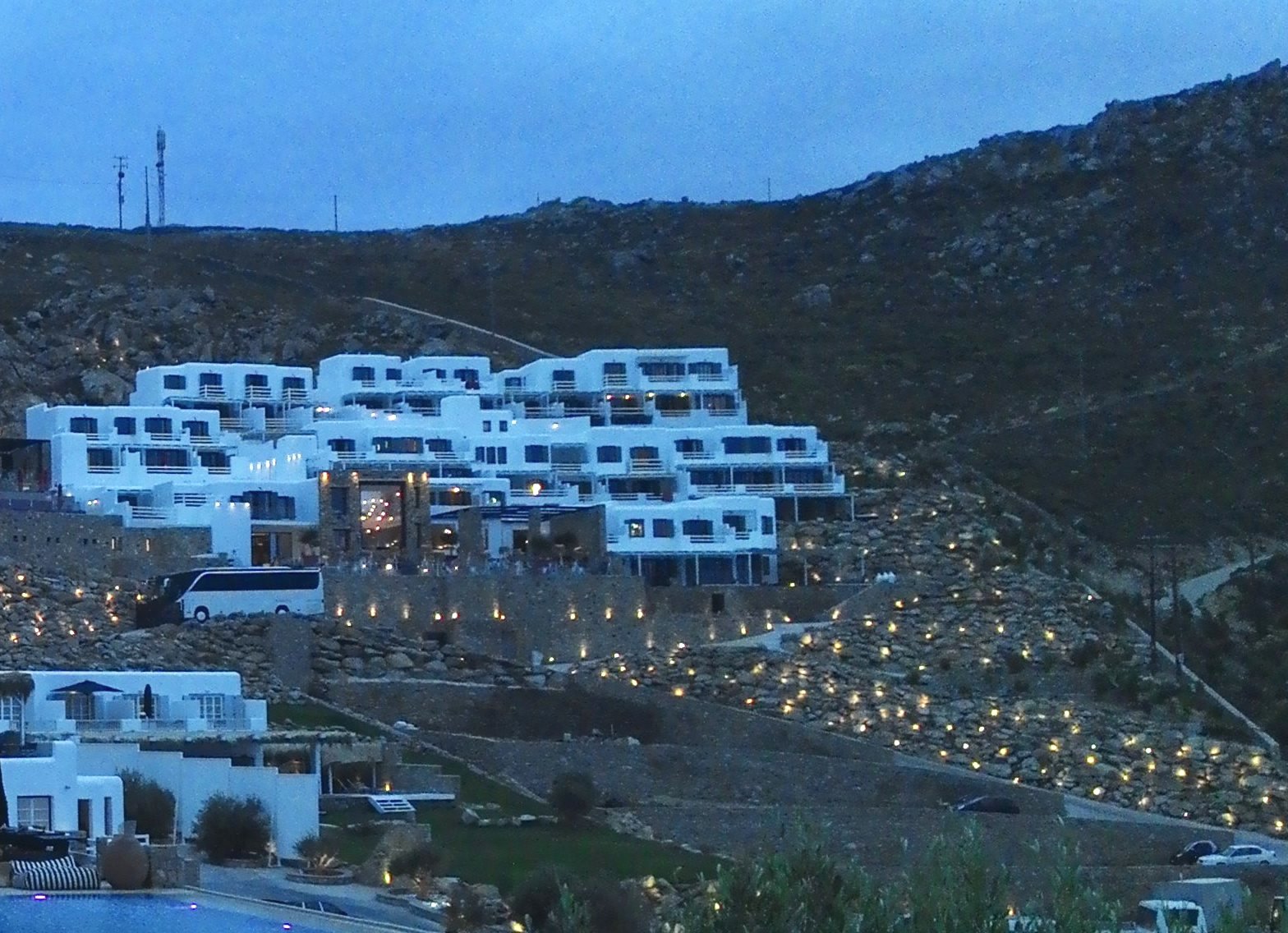 The hotel, where the conference was, was also a surprise. The Myconian Collection hotel complex is spread out in a spectacular bay (see the upper picture). Each hotel has an endless pool, built on the edge of the rock so that it appears to be linked to the sea. In the evening, the place is illuminated by clever and impressive lighting. Traditional Greek food is served in the restaurants (Moussaka, Darling, Greek Salad) and the general feeling is a pampering paradise.

The last word: If you go to Greece in the summer, then only to Mykonos, because of the winds.