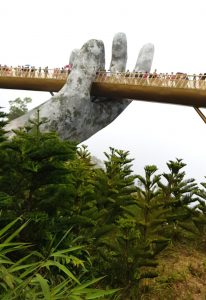 Vietnam is imprinted in many minds as a war zone. Pictures of frightened Vietnamese fleeing bombed houses and villages, the jungles in which the Vietcong hid (the guerillas,) the images of the American captured pilots, the story of John McCain. Thus, the idea of visiting Vietnam seemed odd to me. Who would want to visit such a place? But as I began looking into the matter in-depth, I recognized that today’s Vietnam is different from the image left by the prolonged war (16 years long, Darling). Even Senator McCain came back to Vietnam, not to mention the things you only see in Vietnam and which are worth the visit.

I understood that Vietnam is a very long country, 2,000 kilometers. The length creates problems in terms of accessibility. You can, of course, jump from place to place with flights, trains, or endless car trips, but running from one place to another is not my cup of tea. I decided that to have a taste of Vietnam, the people, the sites, and the food, we would concentrate this time on the central part of the country. In the area between Hoi An and Hanoi (only 800 km long, Darling).

In my search for flights, I discovered that there is a direct flight to Hong Kong, and from there to Vietnam, it is a tiny leap of an hour and a quarter. The direct flight is by Cathay Pacific. All who heard the name of the airline got ecstatic and noted that it was the number one airline in the world. Nevertheless, it is not the best. I am sorry to disappoint and inform the world that a lot of companies today operate the same planes that the company uses. Thus, there is no difference between them and other large companies. When I told friends that I was disappointed, they answered me that maybe because the plane is leaving for Israel, they are not… I have no answer to this idea, but the very thought makes me very sad. 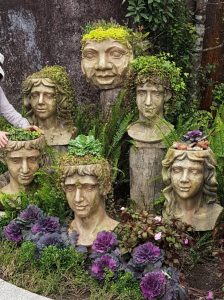 Unlike other countries in the East, in Vietnam most of the population doesn’t understand English, mostly service personnel that are engaged in tourism speak the language. This makes planning a bit more challenging. For instance, it is difficult to choose an English-speaking driver (There are different levels of English, Darling). Thus, in Israel, it is common to contact a Vietnamese tourist agent or travel agency and he, or she, or they, plan the trip, choose the sites, the hotels, and the guides. Of course, you have to inspect and approve. However, if we trust someone, we will not go into specific details. I like to plan for ourselves and choose the hotels and the sites.

As we decided on central Vietnam, we asked for friends’ recommendations and checked out the exciting sites of the area. Though the country is full of attractions, I selected only the ones that interest us. For example, Hue has a seven-story pagoda that is accessible by a boat trip on the Perfume’s river (Thien Mu Pagoda), yet it’s not open to the public. We gathered that most of the pagoda aura stems from it being a declared UNESCO conservation site. There’s the offer of visiting the pagoda by boat, at dusk time and having a cooking lesson on board as well. Since the possibilities are endless, you have to choose according to your taste and interest. Therefore, part of the trip was based on my semi-scholarly knowledge, and the other part was by consultation with the hotels that we booked. This combination promised that we will know all the options and will make informed selections. 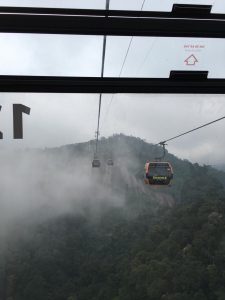 From Hong Kong, we flew to Da Nang on our way to Hoi An. I secured, by emailing the hotel, a driver and a guide that will pick us at the airport, and on our way to Hoi An, we will visit the Ba Na Hills, the Golden Bridge, and have lunch there. Indeed, at the airport, Ming (phone: +84935616369), a young guide with fluent English and minimal accent, was waiting for us. She directed us to the waiting car, and off we went to Ba Na Hills and the Golden Bridge. The Golden Bridge is reached by a cable car. Along the other side of the bridge, there are landscaped gardens, intriguing statues (see above), and the Linh Ung pagoda, with the impressive statue of Buddha, overlooking the gardens and the visitors. From the gardens, we took another cable car to reach the mountains’ top, and the French village, which used to be a recuperation and recreation place. Today the place is quite commercial, full of restaurants and amusement facilities, a winery, a maze, and a wax museum. The trip down is a long cable ride, (about 15 minutes) above the top of the trees. The ride over the amazing greenery, where sometimes fog and clouds block visibility, creates a stunning experience, 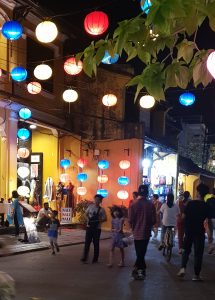 The driver and the guide took us to Lantana Hoi An Boutique Hotel & Spa, the hotel we chose in Hoi An. We chose the hotel by crossing various tourist sites and taking into account the distance from the Old City, which is one of the main attractions. Indeed, the hotel proved to be a great success. The concern and care of the entire staff contributed to our sense of home. The room we chose faced the river’s bank that borders the Old City. Every evening, the locals would gather to sit on the banks of the stream, opened tables, ate and smoked, drank, and played. At 10 o’clock everything was closed up and evaporated as if it had not been. The hotel is located within walking distance between the bridge leading directly to the Old City and the night market. 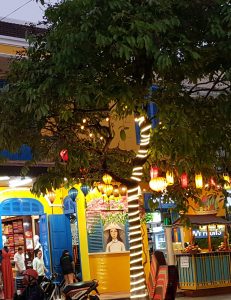 Hoi An is jam-packed with hotels, and most of them are close and around the Old City, being the main attraction. But in fact, Hoi An lies on the shores of the sea and serves as a vacation spot for the Vietnamese themselves. Tourist websites refer to the city as the city of lanterns and tailors. The primary attraction in Hoi An is the picturesque little one-story houses that serve nowadays as shops and restaurants. The tiny houses are painted in vivid colors and adorned with paper lanterns. In the morning, just the tourists walk around the old town, on their path to the Japanese bridge. However, at night, the place is so busy with locals and tourists, that it is too crowded to move. There we saw, for the first time, the preference of motorcycles over people. Another main attraction is the tailors. Hundreds of tailors’ shops and they sew any model in all fabrics in one day. You chose today, tomorrow you will come for a fitting, and in the evening the clothes will arrive at the hotel. You can choose from fashion magazines or take your example from home. Prices vary from cheap to reasonable. I brought with me an example of pants that I especially love, and I bought two pairs of pants and fitted two blouses. The following day, it was ready for me to try on and, in the evening, after some alternations, everything was driven to the hotel. 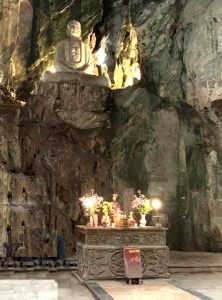 On our way from Hoi An to Hue, the next city, we stopped at the Marble Mountains reserve. The marble mountains are a ridge built up of five high hills, named after the five elements: metal, water, forest, fire, dry land. Today only the large one is open for hiking, Thuy Son, where you can spend several hours. Of course, it is possible to climb the stairs (152 in number, Darling), but you can spare your legs for wandering around. Wandering about the place also involves plenty of stairs. Hence it is better to use the elevator that reaches almost to the top. Historically, it was a place of solitude, prayer, and espionage after armies (the French and the Americans). Today we enjoy the magnificent prayer caves and the stunning sculptures. 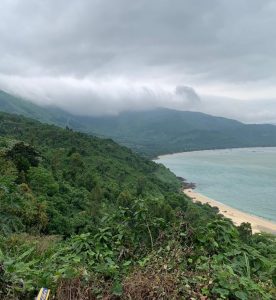 We continued over the Hai Van Pass, which is known as the “Sea of ​​Clouds Passage.” At this point, the mountains reach the shoreline. Therefore, it is a strategic point in every war. The crossing is 21-kilometer-long and 500 meters high. Its name stems from the steam that rises from the sea and creates fog. The fog thickens into clouds, creating a connection between the sea and the clouds. We reached the passage on a very cloudy day. We did not see the fantastic scene, but we felt our soul out rooting whenever the driver decided to overtake a truck. Since visibility was none existent, he bet on our lives. The mountains are tall, wooded, and the winds are particularly sharp. The quality of the road is excellent and is considered one of the attractions for riding a motorcycle. 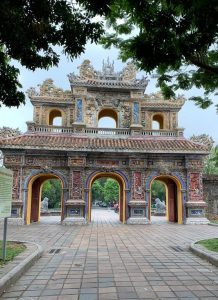 We exhaled a sigh of relief as we reached Hue. The city was the capital for a time, through the reign of the Nguyen dynasty. It resides along the banks of the Perfume River. The uniqueness of the city is its “capital district,” or by its popular names, the royal city. The citadel planning and construction began in 1802. It was designed according to geometric and geographic principles, Vietnamese principles, and philosophical principles of the ancient East. The five essential points: the four winds and the center; The five natural elements: metal, water, wood, earth, fire; And the five primary colors: red, blue, yellow, white, black. It is square, sprawling over ​​5.2 square kilometers, and each of its walls is 2,235 meters long. The surrounding wall is 21 meters thick and 6.6 meters high. During the war between the north and the south, it became a refuge for the forces of North Vietnam and was therefore heavily bombed by the Americans. In 1993, when it was declared a UNESCO World Heritage Site, a massive reconstruction of the destroyed royal city began. Today you can see restored buildings and gates, and they are colorful and elegant (see image). 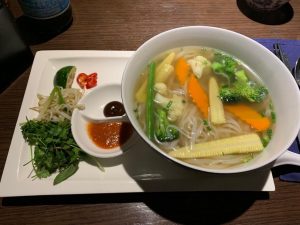 From Hue, we flew to Hanoi. We arrived in the evening, with a domestic flight of Vietnam Airlines, after a delay of a couple of hours. Exhausted from an endless wait that kept lengthening, I could not recollect whether I reserved a pickup or we had to take a taxi. I was so fatigued (with a bit of jet lag, Darling) that I did not even bother to find out. As we left the airport, we saw my name on a large clear sign. I almost fell into the driver’s arms with happiness. The driver brought us to the hotel, La Siesta Diamond hotel, which is in the old town. I picked out another hotel of the Siesta group, but there was no room for our dates, and God’s hand directed us to this hotel. Of all the hotels in which we were, the way we were welcomed, the location, the restaurant on the top floor, and the spa are all exceptional. When we arrived, they waited for us by the front doors and greeted us as if we were old guests. We were served with a fabulous cold juice and cookies, and they started to explain what are the hotel’s facilities. I interrupted them and told them that we were too tired and quite hungry that we would not remember it until morning. We were immediately offered a reservation at The Gourmet Corner restaurant on the top floor of the hotel, and they showed us our room. That’s how we discovered the hotel’s fantastic restaurant, spectacular and tasty, that became our home away from home.

The last word: “Of all the problems you may meet on your journey, it will be people who are the greatest danger. But it will also be people to whom you must turn if ever you requireare in need of aid.” Linda Sue Park, A Single Shard.